“The worse of coronavirus is hunger.

“Many people in this area are suffering from hunger. Government promised to dispatch food items like Rice and Semovita, but people in this axis have not seen anything of such.

“So many people are dying of hunger.

“How would people survive without food during this lockdown?

“This is worse than coronavirus,” says Okwudili Jumbo, a resident of Orile Iganmu area of Lagos.

Complaints and wailing by residents in several parts of Lagos have trailed the palliative announced by the Federal and Lagos State governments to cushion effects of the lockdown imposed on the state to contain the further spread of the coronavirus pandemic.

President Muhammadu Buhari ordered a 14-day lockdown due to the coronavirus epidemic on Sunday, 29 March 2020, via a national broadcast to Nigerians. In his words, “I am directing the cessation of all movements in Lagos and the FCT for an initial period of 14 days with effect from 11pm on Monday, 30th March 2020.

Of Nigeria’s over 3,000 confirmed coronavirus cases, as of May 7, 2020, over 1,300 cases, were detected in Lagos with 103 number of deaths recorded. But a major concern surrounding the lockdown, which kicked off in late March is the inability of many Lagosians to stock up on food and other essentials for survival during the lockdown period.

Many Lagosians, however, have complained about the difficulty faced in feeding themselves. The stay-at-home order has cut countless people who live hand-to-mouth in the city off from their only source of survival.

A female resident at Orile who does not want her name in print, said, “the situation is getting worse everyday. Many people are hungry. I have four children at home. I left them this morning because there is no food to eat at home. I came out this morning to see if I will get help from people. Many people have stopped work and some have lost their job, but when you keep people inside without any means of survival, the problem will  keep getting worse.”

Residents at Aguda area of Surulere say they only received packages from private individuals but none from state or federal government.

Paul, a trader at Aguada market, Surulere area of Lagos said, ”Government has not given us anything. We are only managing and surviving on our own. We traders come out in the morning to sell. Others who are not opportune to sell their wares come here to beg us for money.

The Lagos State Emergency Food Response Initiative was established to extend relief materials and distribution of food to the poor and vulnerable people in the state.

Lagos governor, Babajide Sanwo-Olu, announced an economic stimulus package that covers taking food to the doorsteps of millions of residents in Nigeria’s most populous city.

The handout initiative from the Lagos state government aims to provide rations to an initial 200,000 households to last them through the two-week shutdown.

This project, it was gathered, was to be spearheaded by Lagos State Emergency Food Response Initiative.

Sanwo -Olu said that the aged citizens from 60 years and above with a family of six and the most vulnerable would be given priority, especially those who relied on daily wages for survival.

“We have packaged dry food stimulus for about 200,000 families in the first instance for a household of a husband, wife and about four children. We would be giving bags of rice, bags of beans, garri, bread, dry pepper, and we are trying to see if we can add water and some elements of Vitamin C. Each ration, we believe, is going to be able to last a household of husband, wife and about four children for, at least, a minimum of 14 days so that our advocacy around ‘stay at home’, ‘stay with your loved ones’ will be respected,” Sanwo-Olu said.

A trader at Lawanson market, Mrs Ogbonnaya Chinelo says she is aware the state government is distributing relief packages to residents, but they have not extended it to Surulere local government area of the state.

“Nobody in Lawanson has received relief package from the state government. I used to ask people around and no one claims to have received any package, at least for now.”

“They came to my street, they gave only four bags of rice; a street of about 30 houses.

“As a person, I feel the relief material should be distributed in a way that everybody will receive.

“The governor has tried his best but we, the masses, are the problem of ourselves.”

Read Also: FACTBOOK: Coronavirus In Nigeria — Everything You Need To Know

Another resident, Aigbe Miracle said she heard government is distributing food but she hasn’t seen anyone receive relief package.

“A woman told me that in her street where there are four tenants, Lagos food response team brought one ‘derica’ of rice and beans each, with bread of N100. This means four tenants must share one derica of the items brought, meanwhile, the woman has four children at home. How will they survive with such little items?”

Residents of Orile came out en masse to lambast the Lagos state Emergency Food Response team over perceived bias the distribution of stimulus packages to Lagosians.

They further cried out about hunger that cannot be helped due to the lockdown. The residents claim they have not sighted or received any stimulus package in the area.

They, however, admitted that Lagos police is doing its best to secure the area from the infamous one million boys rampaging the state.

A resident, Bernard, a businessman says “In terms of government palliative, nothing is happening at Orile. Whatever it is the government is sharing, they should please extend their arms to this area because we have not received food or money, even electricity is not constant. We are really suffering. The worst thing is the price of commodities are inflating everyday, and there is no money for us to buy. All of us have been left at home to die to hunger.”

Another resident at Orile, Michael, a trader, says, “I have not received anything from the government, not even a recharge card of N100. I only receive messages from NCDC everyday. I am not going to survive with the messages.”

At Oniru, Eti-Osa local government area of Lagos, residents trooped out to get relief materials from a foundation spearheaded by music entertainer, BankyW. Resident at Oniru slammed the state government for abandoning them to their fate. They showered praised on the music entertainer for taking up the responsibility of a failed Lagos government.

Another Lagos resident, Moses Otayokhe, a retired civil servant, said text messages were sent around by Lagos state government, including me, asking me to confirm if they still leave in a certain address. I replied the text messages several times, but up till now, nothing has been done. So, what do you expect somebody like me to do, I don’t work, I am a retiree.”

Palliative For APC Members Only

Lawanson market at Surulere area of Lagos was beehive of activities when Information Nigeria visited. The residents bemoan stimulus packages distributed by the state government.

Many of them confirmed that the packages largely politicized and were distributed to members of the ruling All Progressives Congress (APC).

Both buyers and sellers at the main market slammed Lagos and federal government for abandoning them during the lockdown period.

Olamilekan Sulaimon, a respondent at Lawanson market, said he hasn’t received any palliative from the state government. He says food items were distributed to members of the ruling All Progressives Congress APC only.

“Dem no give us anything. Dem dey do am as APC member. APC member nah in dem dey give food. But e no suppose be like dat. Na all of us vote for them.”

Another resident, who simply identified himself as Kingsley, said: Itire Ikate Chairman brought out relief materials but his boys only distribute to APC members only. If you don’t go there with your APC card, you will not get any palliative. People are suffering very well in this area. If government wants to share food, they should share for the masses because Nigerians are crying.”

Corroborating the previous respondents, another resident — an aged woman, Mrs Egwuonwu — said, I have not seen anybody that received palliative, except the day they were sharing bread. The main palliatives were given to APC members only.”

Ambrose Dike says “Government promised to send food materials, and when they send it, it doesn’t get down to the people. The government is using the relief package as political affair. That is why you see people coming out to fend for themselves.”

The above isn’t a poem. It is a lyrics from Rude Boy’s ‘Audio Money’ music.

Their monies or wealth are never seen in reality but only on social media, hence, the term ‘Audio Money’.

The Federal Government’s Conditional Cash Transfers (CCT) has received several knocks from Lagosians, and has been termed ‘audio money’.

The cash transfer scheme, which is part of the Social Investment Programme (SIP) of the current administration is under the newly-created Ministry of Humanitarian Affairs, Disaster Management and Social Development and being superintended by the Minister, Sadiya Umar Farouq.

On March 30, the Federal Government announced palliative measures such as food distribution, cash transfers and loans repayment waivers to ease the pains of its restrictive policies during this difficult time.

But many Lagos residents who spoke to Information Nigeria said they have neither received any money nor food items from the Federal Government since it was announced.

Mr Samuel, a businessman, says both the federal and state government are greedy. According to him, other foreign countries are helping their citizens during the lockdown but the Nigerian government have refused to help its citizens to cushion the hard effect of the lockdown.

“Tomorrow, they will say they don’t know how to pay money into our account, but they have our BVN, account number, and voters card. They know what to do but they refuse it.”

Olamilekan Sulaimon said, “They asked us to stay at home, but they didn’t provide anything for us. Before Buhari will ask us to stay at home, he should be able to provide at least N5000 or N2000 for every citizen. The N2000 gan we no even see anything. Make dem follow Buhari talk make he share money.”

Information Nigeria understands that five states of the federation, including Lagos, Delta, Borno, Ogun, and Ebonyi were conspicuously excluded from the list of states currently benefiting from the federal government’s N20, 000 conditional cash transfer scheme to the poorest and vulnerable households in the country to cushion the hardship posed by the COVID-19 pandemic. 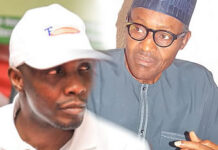