Adams made this remark in a statement by his Special Assistant on Media, Kehinde Aderemi on Wednesday.

Adams described the judgment as a reflection of people’s hope in the judiciary.

The 12 aides of the embattled Yoruba nation agitator were arrested on July 1 during the attack on Igboho’s Soka residence.

The Yoruba Generalissimo expressed hope in the ability of the judiciary, saying the judiciary remains the bastion of hope to the people.

“Let me applaud the courage of Justice Obiora Egwuatu for her strength of character. She has distinguished herself as a woman of hope and with today’s ruling, I think ordinary people can begin to repose faith in the judiciary,” he said.

Adams also saluted the courage of the detained aides “for standing firm in the face of stiff condition”. 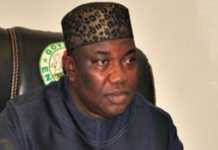