The former Premier league champions posted a picture of the 54-year-old tactician on their official Facebook page with the caption, “Rest in peace, Stephen Keshi”. 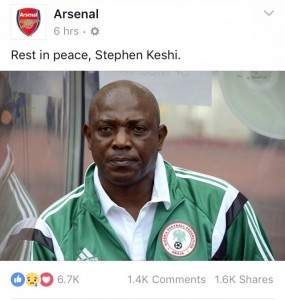 SAD! Keshi is the FIFTH Of The Super Eagles ’94 Squad to Pass On

Since the news broke, the sporting world has been remembering the football legend, who died from cardiac arrest in the early hours of Wednesday, June 8, 2016.