Talented singer, Dotman, got a sharp and unfriendly response from Aloma, a DMW crew, after declaring Wizkid as the ‘greatest of all time’, despite being a great buddy of Davido, the eternal rival of Wizkid.

Dotman while taking to his Twitter handle said nobody should compare the ‘Joro’ crooner to anybody again adding that he is ‘greatest of all time'(GOAT).

He went on to advise him to stay where he is adding that they are already complete in their team.

See Dotman’s previous tweet about Davido and his exchange with Aloma below: 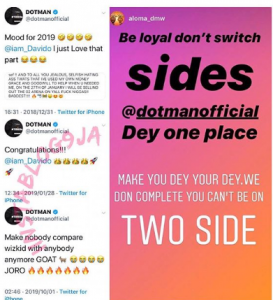