Home Entertainment Davido Reveals He Was Working On A Song With Juice Wrld Before...
Facebook
Twitter
WhatsApp

The entertainment industry was thrown into mourning following the death of American rapper, Juice Wrld, who passed on at the young age of 21.

Reacting to his painful exit, David Adeleke also known as Davido has revealed that he was working on a song with the talented singer before his demise.

Taking to his Instagram page, he shared a screenshot of his last chat with the singer which confirmed that the duo were really working on something before the rapper passed on.

The singer passed on after suffering a seizure at the airport.

See their chat below: 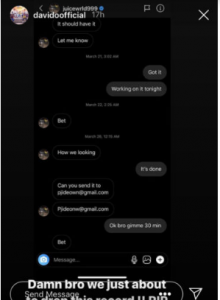