The new photo was shared by former lawmaker, Dino Melaye via his Official Instagram page on Wednesday, 11th December.

The photo was taken after the Nigerian born- British boxer reclaimed his titles from Andy Ruiz in a rematch that took place in Saudi Arabia on Saturday, 7th December.

The boxer was declared winner over Andy Ruiz in an unanimous point decision.

AJ with his father Mr Oluwafemi 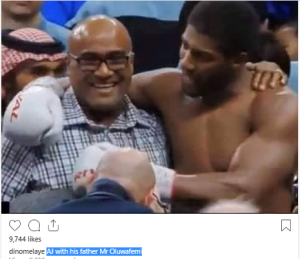