Controversial actor, Uche Maduagwu has taken a swipe at singer Burna Boy by saying the only difference between him and fellow singer Davido is that while he is a boy, the latter is a man.

He made this known in a series of rants on his official Instagram page on Wednesday, 27th May.

“The only difference between you and @davidoofficial is that David is a MAN, and you are a BOY according to your stage names.🤷‍♂️🤷‍♂️By their stage names you will know their worth. Men gets nominated for #Grammy Awards and they WIN it, 💎not loosing it to #girls. Men have kids and thats what makes them responsible like baba #FELA. 👬Men are called #ODOGWU in Igbo land only when they pick a Chioma or any #beautiful girl to be the mother of their child.

“Men dont forget those who sacrificed their time to making them a success, but #BOYS will always open their mouth to brag that nobody paved a way for them to succeed in their career, Oga, no man is an island oh. 🌎#Davido is not your mate in this #music game, #hello, i am the only popular #actor that has ever gotten @chrissyteigen attention in #Hollywood, 🎬if i dont settle this unnecessary supremacy debate in our music industry, abeg who will? If its paining you, i am in my house, 🦉but dont come and beat me oh, do you think i lodge in #EkoHotel?” 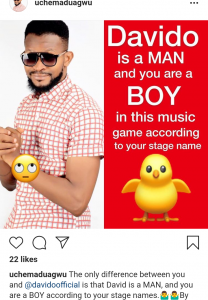