Critics had said the self-styled ‘Omo Baba Olowo’ is only helping people for clout chasing.

Reacting to this, Skibii pointed out that at least the popular singer is helping others irrespective of clout chasing or not.

He added that he is still better than people who are not doing anything even if it is for the sake of clout.

Conclusively, he advised people to also do their own for clout. 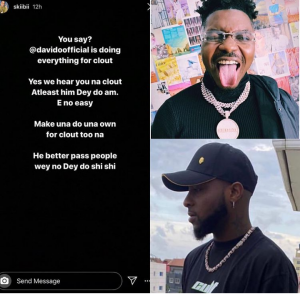