The makers of 2020 American action-thriller film “Extraction” have invited Nigerian comedy group, Ikorodu Bois to the 2nd premier of the movie in Hollywood.

The Nigerian teenage comedy group had recreated the movie and shared it on their Twitter page.

The young Internet sensations also pleaded with their fans to help re-share the video till it gets to the movie’s lead actor, Chris Hemsworth and movie world’s leading streaming entertainment service provider, Netflix.

Few hours later, the video, which garnered nearly 3 million views on Twitter, caught the attention of the directors of the movie, Russo Brothers.

Quoting their tweet, the American directors offered them an invitation to the premiere of the second season of the movie.

“This is awesome! We would love to have you guys at the Extraction 2 premier. DM us and we’ll get you there!”

Reacting to the exciting news, the Ikorodu Bois said it would be a dream come true for them to attend the movie premier.

Read Also: Cee-C Breaks Silence; Reveals There Was An Accident 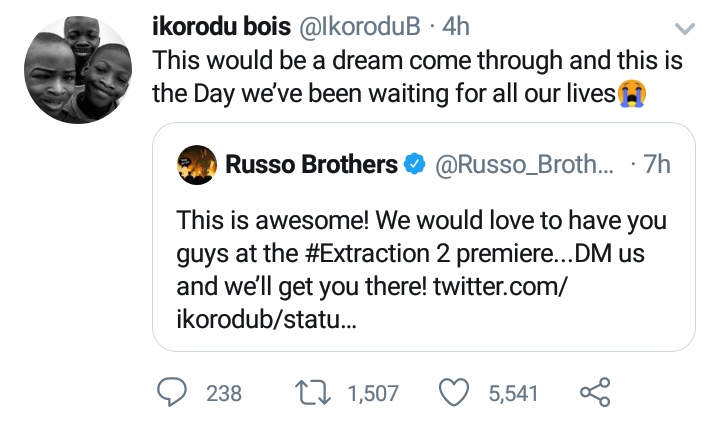