Sapphire scent owner, Wale Jana, has gotten social media users talking after saying that Mercy who won the 2019 edition of the BBNaija show because she was well-behaved, adding that nasty people don’t make money.

His comment on his Instagram page has got people saying the luxury watch merchant was throwing subtle shade at former BBNaija housemate, Cee-C, who was signed to his company as a brand ambassador but was reportedly dropped over unruly behaviour.

“I watched as Mercy clinged the cash prize of 60 million yesterday and I learnt a couple of things:

1. Originality sells; Mercy was just being herself, she’s a beautiful woman who doesn’t hide her emotions, she played the game but her heart was in it, she wasn’t acting a script.
2. Nasty people don’t make money: If a brand or an organization invests in you and you start behaving irrationally by breaking their rules and acting like an unfortunate person they will dump you and the gist will spread, I give you 3 years you will be forgotten and broke. Nasty people are bad for business if their character stinks drop them like a hot plate.
3. Faith is valid: Mercy talked about winning that money than every other housemate. Say what you want to see and it will happen!
Tag someone who should read this. You too can be a social media evangelist. Please share so that others can be blessed as you have been blessed. ThankYouJesus” 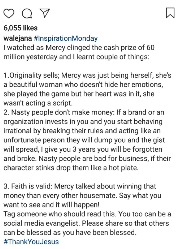