Controversial On-Air-personality Daddy Freeze has slammed the Redeem Christian Church of God pastor who claimed that he conquered a snake that was sent to attack him during a church service.

Daddy Freeze in his reaction claimed that the snake must have been going about its business before going on to query why people are this stupid?

Read Also: ‘She Did It Off-Campus’ – Daddy Freeze Condemns Expulsion Of Babcock Student Over Sextape

The controversial radio personality made his view known via his Official Instagram page shortly after the story became viral.

But why are we stupid like this? Snake wey dey go him own jeje 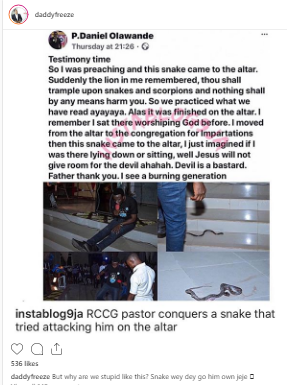