Popular sex therapist, Jaruma, has opened up on the details of how disqualified former BBNaija housemate, Tacha, used her to achieve her aim only to dump her after leaving the reality TV show.

Speaking via an Instagram post, she revealed that the reality TV star called on her before going into the house for help and she was at first reluctant.

Read Also: Mothers In Port Hacourt Are Praying For Their Daughters To Be Like Mercy: Nollywood Actor Shades Tacha

She said following pleads from the likes of actress Nkechi Blessing and co, she decided to help her by campaigning strongly for her while in the house only for her to get disqualified and not appreciate all she did. 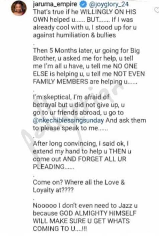